A pulse jet engine is a jet engine to which the intake of air is intermittent (through valves), resulting in a pulsating thrust. It is a jet propulsion engine containing neither compressor nor turbine, equipped with valves in its front that open and shut and so create thrust intermittently, rather than continuously. A pulse jet creates a lot of thrust.

Sorry, NO drawings of this engine available, just this bitmap images. For plans see: 'Ordering pulsejet plans' or 'The AMT pulse delta'. 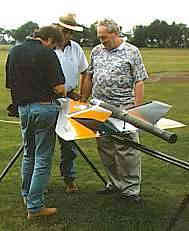 At the 1998 airshow of Apollo 68 in Horst, I met Jean Quaedvlieg (Quaedvlieg Technologie) who has been building pulsejets for almost 25 years.
He showed a beautiful delta wing plane (wingspan 1000mm, length 1450mm, symmetrical wing) equipped with his pulsejet. 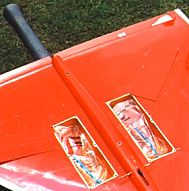 Two plasmabags with fuel enable a just over 3 minutes flight.

The max speed for this aircraft is about 320 km/h.
At this show the plane was flown simultaneously with the KB70 pulsejet of Bennie van de Goor. 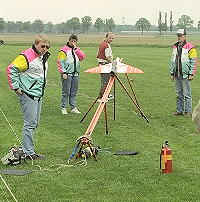 Mounted in a KB70 Delta, it gives the plane a speed of 390 to 445 kilometers per hour, depending on temperature and air pressure. Very spectacular to see, if flown by an expert like Bennie van de Goor. Two 1 liter hospital plasma bags are used as fuel tanks, mounted in the wings. The max. measured speed of the KB70 is 431 kilometers per hour. The thrust of the engine is 90N.
A disadvantage of this type of engine is the sound production, so in The Netherlands it may only occasionally be flown in model air shows. The left-side photo shows how the KB-70 gets launched, while the right-side photo shows how the engine gets started.

Both the engine and the plane are not for sale, but the good news is:
Autocad drawing file for both KB-70 and pulsejet downloadable from AMT pulsejet Page

Some technical info on the KB-70 and the used pulse jet engine, just in Dutch as I got it from Bennie van de Goor:
A few terms translated: spanwijdte (wingspan), brandstoftank (fuel tank), vluchtduur (duration of flight) 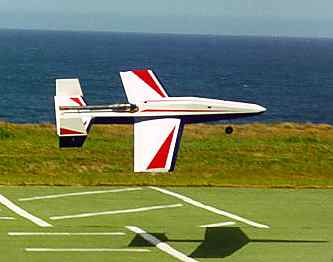 Richard Caine provided me with some other info on pulse jets. He has drawings of about 15 pulsejet engines. Only hardcopies. The pictures you see at the top of this page come from Richard and are for the brauner pulsejet which has been successfully home built by a number of people over the years.
The picture on the left shows Richard's recently finished pulsejet trainer.

On April, 28, 1998 Richard mailed the following comment to me: " Just letting you know that I've been flying the jet model with a bladder tank system. It rolls, loops and does any of the roll/loop combination type manouvres without any flame out problems. A full tank of fuel (80% methanol, 20% ether) gives me an engine run of about 3 min 20 seconds. The glide is quite gentle for that style of model. The model is not particularly fast. I am now designing a much sleeker, faster jet model. "

If you want to contact him, use: or visit his site: Pulsejet Jet Engines

He also gave me the address of BMS who produce commercial pulsejets for models. You have to order direct from the manufacturer. If you want to talk to someone there, Earl Bailey is the man to talk to. He has a great knowledge of pulsejets.
As far as I do know BMS does not have a homepage.

VTH (Verlag für Technik und Handwerk GmbH , Germany) still has some plans available for pulse jet engines. To order these plans you have to visit the VTH site (will open in new window). The site is in German language only.
Click on Modellbau and then search for 'pulso'.
To start the search press the 'Los!"-button (Go)

You might also try 'katalog' for a search. This will a.o. show you the newest catalog (modelbaupläne)

At my club (Icarus) I found a control line plane equipped with a homebuilt pulsejet.Nobody could tell me who has built the plane and the engine, but it must have it's origin in the late 60's. It's a 68 cm wingspan model with a 48cm pulse jet engine, covered with the dust of almost 30 years. For the photo it was cleaned a bit. As I was told this plane reached 314 km/hour, and this in the centre of Amsterdam on the Museumplein, next to the Rijksmuseum. Probably no noise and security limitations at that time!!!

Last but not least

If you are interested in more plans etc., visit Kenneth Mřller 's pages. You'll find a link on the Airtoi linkpages under European links, Denmark and under Jet related links.
On the Airtoi JetLinks page you'll find more links about pulsejets

Your browser can show frames, but you don't see my frames? Click on the image